Built almost 1000 years ago by William the Conqueror, Lincoln Castle has witnessed some of the most dramatic events in English history.

After William the Conqueror's victory at the Battle of Hastings in 1066, he faced continuing resistance and ordered the construction of a castle at Lincoln as part of his strategy to control the rebellious north of the kingdom.

The castle's commanding position not only afforded far reaching views, it also served as a reminder to the local population that the Normans were in charge.

Centuries earlier, the Roman invaders had built their legionary fortress on this hilltop. In 1068, the Normans constructed their motte and bailey castle here, re-using the remaining stone walls of the later Roman city, Lindum Colonia.

The castle walls were built in stone in the late 11th century, replacing the temporary wooden palisade. Lucy Tower, a permanent stone 'shell' keep replaced the first wooden keep on the earth mound.

Lincoln Castle bears the scars of the bloody battles fought by opposing forces who sought control of this strategically important stronghold.

In 1141, while King Stephen was occupied in a war with his cousin Matilda over the English crown, he fought to wrest back control of the castle after it had been claimed by Ranulf, earl of Chester.

During the battle, which came to be known as the 'Joust of Lincoln', Stephen was captured outside the castle and taken to Matilda as a prize and imprisoned.

Only when Matilda’s half-brother was captured seven months later, and exchanged for Stephen, was the king restored to the throne.

Fifty years later, under the leadership of Lady Nicola de la Haye, the castle withstood a 40-day siege by Richard I's chancellor, Longchamps, when he demanded the loyalty of supporters of the king's younger brother, Prince John.

Nicola, in her own right as constable, defended the castle again in 1217, during a civil war that followed King John’s refusal to honour Magna Carta in 1215.

During the hostilities, rebel barons allied themselves with Prince Louis of France and seized control of swathes of England including the city of Lincoln.

But the castle, a royalist stronghold, held out against the French forces and rebel barons under its formidable constable. This battle was of national significance and turned the tide of the French invasion.

If the Royalists had lost, England could have come under French rule.

Lincoln Castle was besieged for the final time in 1644, during the English Civil War, when the Royalists holding it were overwhelmed by a mightier Parliamentarian force.

Archaeologists have discovered an astonishing range of bird, fish and animal bones - from plover, lapwing and swan to conger eel, oyster and venison -in a medieval rubbish pit, perhaps the remains of a lavish feast held in his honour.

King John spent several days at Lincoln in September 1216, shortly before he lost his jewels and baggage in the incoming tide of the Wash. Within two weeks of his visit, he died of dysentery at Newark Castle.

Over three hundred years later, in August 1541, King Henry VIII accompanied by his young Queen Catherine Howard 'rode at afternoon to the Castle and did view it, and the City’ as part of his 'royal progress' to York.

The charter sent to Lincoln in 1215 was read out at the sheriff's court in Lincoln Castle, before being placed in the cathedral treasury for safe-keeping. Retained in Lincoln ever since, it is one of only four surviving originals.

Cobb Hall defended the castle’s north-east corner from the 13th century onwards. The tower's vaulted ceilings also suggest that Cobb Hall might have been used as a chapel as well as a dungeon.

Between 1817 and 1859 executions by hanging took place on the roof. Vast crowds gathered below the castle walls to watch each of the 38 condemned prisoners meet their fate on the wooden gallows.

Lucy Tower, originally one storey higher, enclosed the constable of the castle’s living quarters which were constructed in timber.

The tower's east and a west wing have not survived. In the early 19th century the tower became a burial ground. Graves of prisoners who were hanged at the castle still lie within.

The Observatory Tower's turret, added in the early 19th century, sits atop the original medieval stonework. The purpose of the turret is not known, but it may have gained its name from the time John Merryweather was gaol keeper of the Georgian gaol between 1799 and 1830.

His hobby was astronomy and gazing at the stars through his telescope.

During the Second World War, Civil Defence volunteers, equipped with binoculars and just a tin hat for protection, kept a look out from the roof for enemy aircraft in the skies above Lincolnshire.

William Chaldwell, a royalist prisoner held in 1643 during the English Civil War, was thrown into a 'stinking witch hole', a reference to the earlier incarceration of the so-called 'Belvoir Witches'.

They were hanged in 1619, accused of causing the death of the Duke of Rutland's young son.

In the 18th century, the gaol at Lincoln Castle, like others at this time, was run as a private business. Prisoners had to pay for their keep and unscrupulous gaolers charged excessive fees for food and bedding.

Prisoners were locked up together in filthy, crumbling dungeons and buildings without fresh water or sanitation. There are no traces now of the earlier prisons within the castle walls.

The red-brick Georgian gaol was built in 1788 to hold both felons and debtors. The debtors were treated more leniently and housed in the front range, still standing.

The prison governor also lived there in an apartment with his family.

In 1848, a national prison building scheme saw the demolition of the felons' wing and the construction of a new Victorian prison wing.

This became a 'holding' centre for short term male, female and child prisoners awaiting trial at the courthouse, and convicts pending removal elsewhere to serve their sentence. The debtors continued to be held in the Georgian gaol building.

The Victorian prison was designed to implement the 'separate system' - a regime intended to keep prisoners separate from the corrupting influence of their fellow inmates, and bring about their moral reform.

Separate cells were provided with a sink, toilet and hammock so that there was no need for prisoners to leave them except for exercise and fresh air in the airing yards, and the daily chapel service led by the prison's chaplain, the Reverend Henry Richter.

In the event, the separate system was never fully implemented due to initial overcrowding, a fever which swept through the prison and, ultimately, the reluctance of the magistrates.

By 1878, expensive running costs and declining prisoner numbers led to the prison's closure just 30 years after it had opened.

Courts have been held at Lincoln Castle since it was first built. Back then the sheriff, who was William the Conqueror's right hand man in Lincolnshire, presided over the castle's shire court.

Today the Gothic Revival courthouse, built in 1826 for the Lincolnshire Assizes, is still a working building where criminal trials are heard by Lincoln Crown Court.

The project involved the restoration of the castle's curtain wall and creation of a new 360 degree Medieval Wall Walk atop the castle's ancient ramparts, restoration and re-interpretation of the Victorian Prison, and the building of a new vault to house Magna Carta and Charter of the Forest with a widescreen cinema for showing films about the documents. 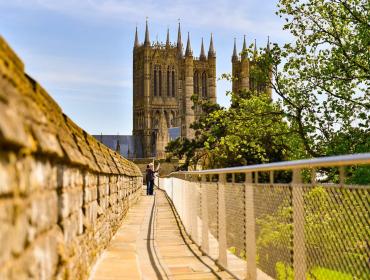 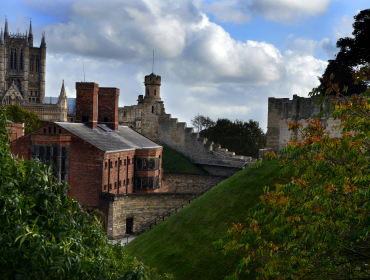 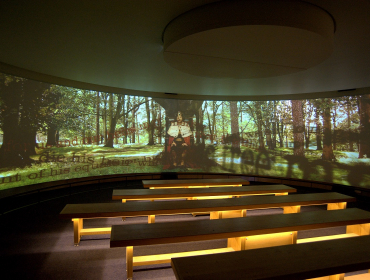 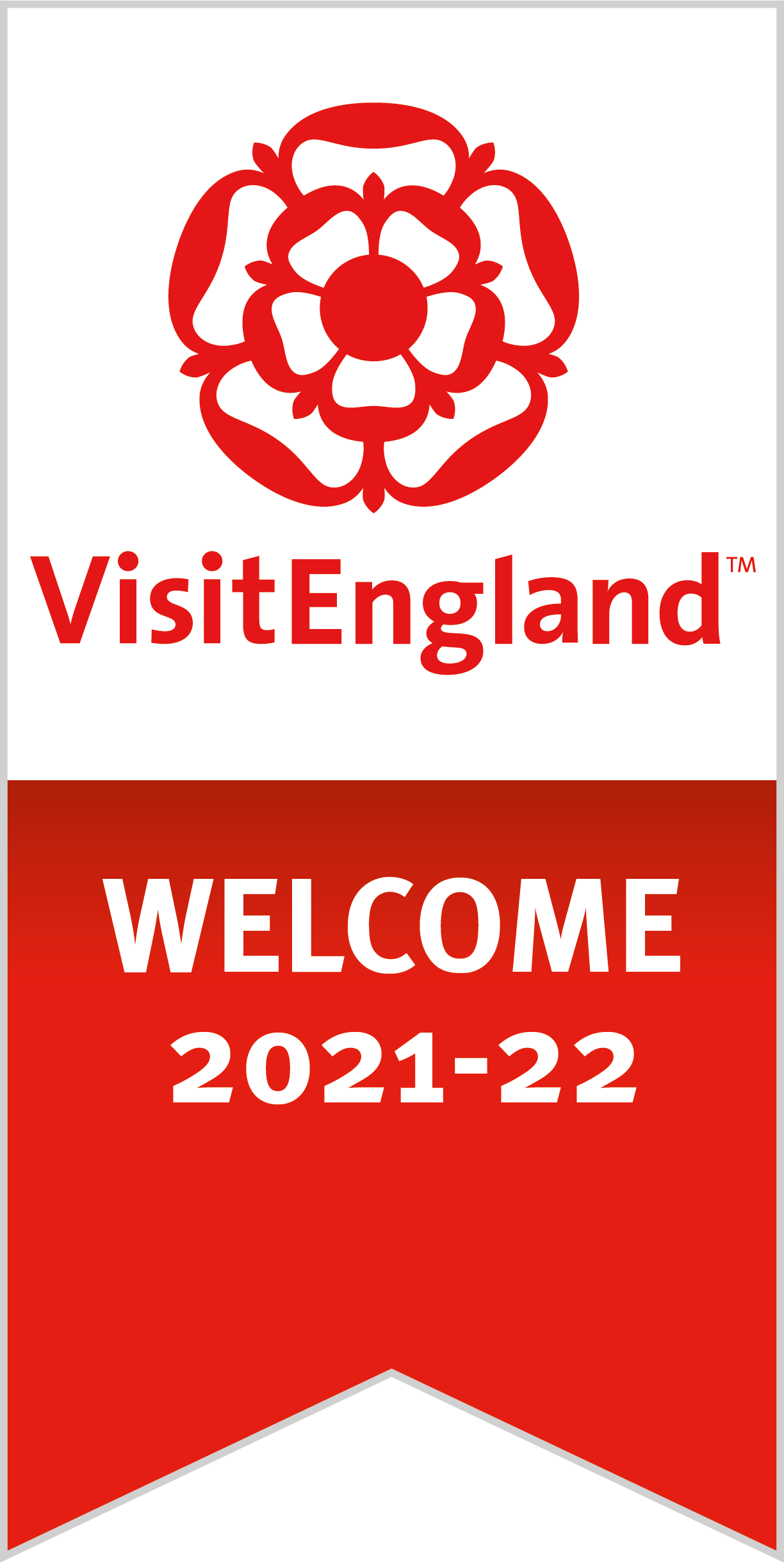